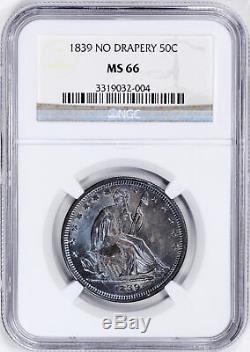 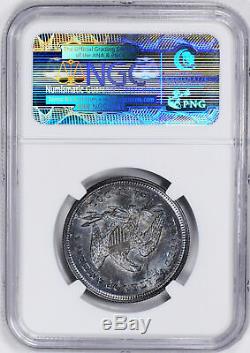 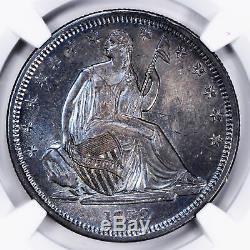 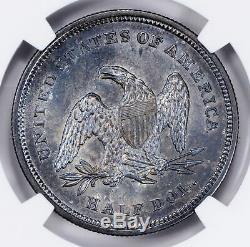 1839 LIBERTY SEATED 50C NGC MS 66. During the 1790s and much of the 19th century, the United States Mint followed a policy of uniformity of design for many denominations. Having been introduced in the Silver Dollar series in 1836, and meeting with approval from those in government as well as the contemporary public, the Seated Liberty design would eventually be utilized on the Half Dime, Dime, Twenty-Cent piece, Quarter and Half Dollar. The first Seated Half Dimes and Dimes appeared in 1837, the Half Dollars' turn came in 1839 and the first Seated Quarters were struck in 1840.

The Twenty-Cent piece did not enter the United States coinage family until 1875. The first Seated Half Dollars struck do not include extra drapery at Liberty's right (facing) elbow.

This is a one-year type, the extra drapery appearing on all subsequent deliveries through the series' end in 1891. It is important to distinguish the 1839 No Drapery from select examples of a few other issues such as the 1845-O that are missing part or all of this feature. The 1839 No Drapery is the only Seated Half Dollar that did not include extra drapery as part of the design. Varieties such as the 1845-O No Drapery are missing this feature due to overzealous die polishing on the part of Mint employees. The item "1839 LIBERTY SEATED 50C NGC MS 66" is in sale since Tuesday, December 31, 2019.

This item is in the category "Coins & Paper Money\Coins\ US\Half Dollars\Seated Liberty (1839-91)". The seller is "rarecoinwholesalersca" and is located in Irvine. This item can be shipped to United States.