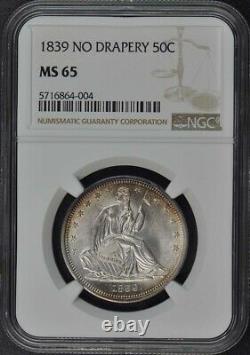 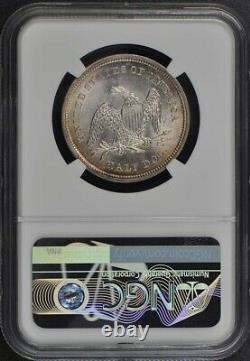 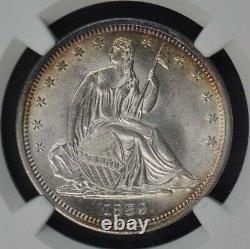 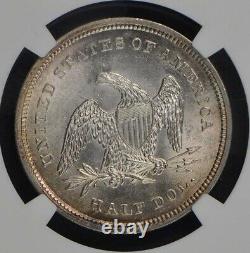 1839 50C No Drapery MS65 NGC. The 1839 No Drapery half is popular both with type collectors and Seated coinage enthusiasts, owing to its status as a first year of issue among Seated Liberty halves and a one-year subtype in the series.

Looking at the entire span of Seated Liberty coinage, the 1839 No Drapery and With Drapery halves are also interesting as the only Seated Liberty denomination to make its premiere in 1839. The Seated silver half dimes and dimes appeared in 1837, joined by the Seated quarters in 1838, the half dollars in 1839, and the silver Seated dollars in 1840.

Both sides of this near-Gem example show satiny luster, with silver centers complementing shades of amber-gold near the rims. A small patch of reeding marks through the first T in STATES, and a little chatter underneath serve as pedigree markers. Eye appeal is strong, and this piece reflects both rarity and desirability in equal measure. We are happy to answer any questions about this or anything in our vast inventory. Return posting costs will be at your expense.

Please check this listing page carefully as the answer is usually there. The item "1839 NO No Drapery Seated Liberty Half Dollar 50C NGC MS65" is in sale since Wednesday, March 4, 2020. This item is in the category "Coins & Paper Money\Coins\ US\Half Dollars\Seated Liberty (1839-91)". The seller is "sarasotararecoingallery" and is located in Sarasota, Florida. This item can be shipped to United States.